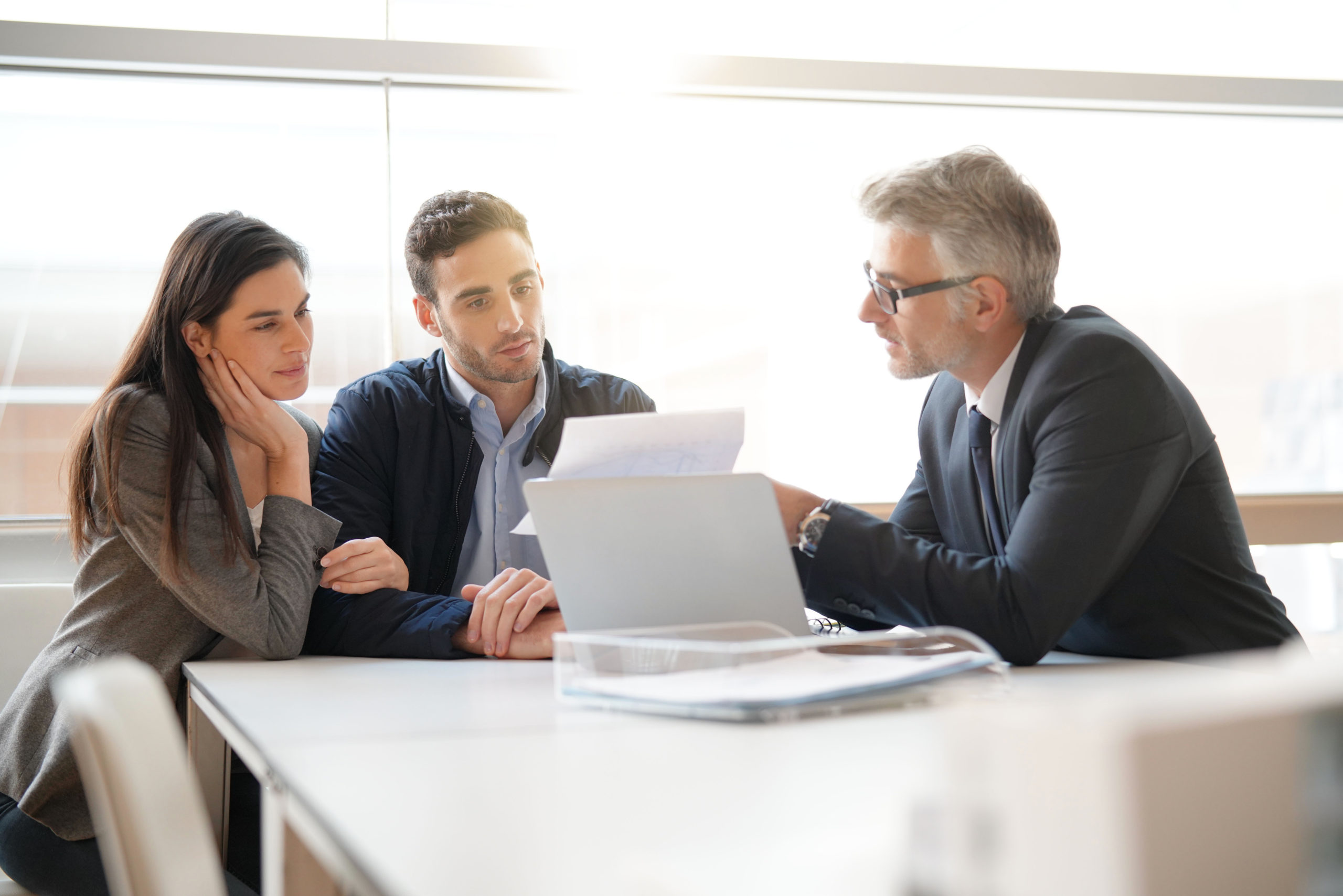 Financial market returns over the long term have been conditioned primarily by Governments’ and Central Banks’ economic and monetary policies.

In this historical period, in which the expansive monetary policies both in the United States and in Europe have brought interest rates to extremely low levels, the saver finds himself in a delicate situation because the yields of deposit accounts, government bonds and bond funds are derisory, the bonds in his portfolio have risen in price and from now until maturity will not yield anything because the gain of the coupon will be eaten up by the descent of the price to 100 and the stock markets are very risky since nowadays the prices are very high with a great risk of a bearish market.

In this situation, it is very difficult for savers to invest their money well: either it yields very little, not even managing to cover inflation, or it risks losing it in search of a return.

The banks’ proposals are securities with returns of 1% or investment funds and policies, which in addition to being very expensive, have a relevant issue: the bond part has an extremely low return, so the overall return on the portfolio depends solely on the performance of the equity part, which the bank, not surprisingly, always recommends increasing, but in doing so greatly increases the risk run by the investor.

Our proposal is a portfolio consisting mainly of high-yield bond ETFs and individual high-yield bonds. This part of the portfolio generates a coupon flow of around 5% and allows us to invest a lower proportion in equities, which drastically reduces the overall volatility of the portfolio and the risk of large losses, and at the same time give us the opportunity to built a portfolio with an excellent expected return.

Among other things, a portfolio of this type allows us to be minimally exposed to a rise in interest rates because most of these assets are not sensitive to a rise in rates as they are made up of short maturity bonds; contrary to investment grade bond ETFs and those on European and American government bonds, which are made up for the most part of long bonds.

The equity part is instead made up of equity ETFs, in particular those on the hottest topics such as cloud computing, artificial intelligence, cybersecurity, green economy, and individual stocks, which we choose taking into consideration macroeconomic variables (Central Bank policies, interest rate levels, economic growth of the States), issuers’ fundamentals (equity soundness, profitability, future prospects), technical analysis (analysis of price movement to identify the best time to enter and exit).

The portfolio is composed of a part of particularly performing stocks, which have excellent fundamentals, a competitive advantage and which operate in high-growth areas, a part of stocks that are undervalued for various reasons (for example because their sector has been heavily affected by Covid) and a part of stocks that are not yet profitable but are growing, whose price could fly the moment they start to make profits.

Our proposal is a personalized portfolio that simultaneously reflects the current situation of the financial markets and is able to meet all your objectives and needs, depending on your time horizon and your risk appetite.

In addition, the portfolios are subject to daily monitoring, are not left at the mercy of events and are subject to a continuous process of alignment to new market scenarios due to the evolution of the political, economic and financial context, thus becoming more aggressive or prudent depending on the situation. A dynamic management of this type, allows you to seize the opportunities that the market continuously offers and to exit the market in a timely manner if the situation is not favorable.

Our personalized consultancy consists first of all in the analysis of the client’s current assets to verify both the correspondence to the risk profile and the efficiency of the individual products. The next step is to build a portfolio with returns that are sustainable over the long term and independent of general market trends.

Depending on the client’s risk propensity, the portfolios proposed by Busnelli & Associati in the last 10 years have returned on average between 5.92% and 15.76% per year. Thanks to an active and careful management, these returns are expected to be maintained in the coming years.

The client, in addition to receiving personalized advice, has the great advantage of receiving independent advice. The firm has no relationship with banks, does not sell products, does not receive retrocessions or commissions. The total absence of conflicts of interest allows us to provide you with the best advice and exclusively in your best interest.

In addition, the capital remains in your bank of choice for your total security and peace of mind.

What we actually do

What we actually do

The services offered by Busnelli & Associati have the sole purpose of achieving the financial objectives of each client.

The main services can be summarized as follows:

In 2008, we closed all equity positions with stop loss, realizing a 7% loss. Banks, promoters and funds suffered a 50% loss. Thanks to this decision, our portfolios were already back in profit by the end of 2009. Those of the banks had to wait until 2014.

In 2011, in the midst of the Italian crisis, we bought Italian bonds, which were extremely undervalued (when the media and analysts were telling us to sell everything related to Italy) and in the following years we realized large capital gains (for example, bonds bought at 94 and sold at 118, in addition to having collected coupons of over 5% per year).

In 2012-2013, we continued to hold bonds when reports from all the banks recommended selling the bonds because they said they were too high. They went up again until mid-2015.

In 2012 we bought financial stocks (Intesa, Bnp Paribas, Credit Agricole, Commerzbank, etc.) and sold them in February 2018 with profits between 30% and 80%.

In 2018 almost all portfolios offered by banks made losses. According to Deutsche Bank research 89% of financial products made losses in 2018.

Our portfolios closed at breakeven or positive.

The bonds and bond ETFs we chose held up better than their respective markets and thanks to the high coupons collected, the bond portfolios closed at breakeven, some even in profit, thanks also to the positive effect of the dollar.

Since the beginning of the year, we have advised against getting into equities, because they are too risky. When all the banks were recommending equity products.

At the beginning of February, we had all the European equities, particularly Italian, that we had from previous years, sold off at peak prices.

We only kept the oil stocks that went up again thanks to the rise in oil prices and we had them sold in October.

At the beginning of October we recommended short ETFs on American and European equities, i.e., ETFs that gain if the markets fall. Both to speculate on the decline and to hedge portfolios, including bond portfolios that could be affected by equity turmoil. While banks advised holding equity products on the upside. Thanks to all of this, our equity portfolios achieved an excellent +12%.

January 2020: in 2019, the portfolios made +10.3% thanks to the very favorable performance of bonds, as well as gold, which is present in all portfolios.

We believe that equities do not have great upside possibilities, but big downside risks, so we continue to have no upside positions on equities.

March 2020: the portfolios have absorbed very well the strong fall of the markets at the end of February.

The portfolios, which since the beginning of the year had gained 2% by mid-February, have returned to parity.

Volatility was very limited. The losses from the highs of mid-February were minimal thanks to the presence in the portfolio of short equity ETFs (ETFs that gain if the markets fall), gold which continued its ascent, ETFs investing in government bonds of developed countries and in the safest corporate bonds which rose at the moment of panic, as well as very short maturity bonds which were not at all affected by the market turmoil.

August 2020: on March 24 we sold the short equity ETFs (ETFs that gain if the markets go down) close to the market lows, achieving a good performance.

We also increased the positions of some ETFs on European and American high yield bonds and of the ETFs on government bonds of emerging countries. All operations already largely in profit.

We sold gold for two reasons: to achieve a 40% performance and to have liquidity to buy securities with a much higher earning potential than gold, which is at an all-time high.

November 2020: before the U.S. elections and with the worsening of the Covid situation we sold Adidas and Starbucks shares and the Etf on the world stock, to cash in the profits and reduce the risk.

After the election and as the availability of the vaccine approached we entered some equities that were very undervalued because of Covid, in anticipation of a recovery in those sectors particularly affected by the pandemic. We bought some stocks that gave very good balance sheet figures, showing once again a great solidity despite the complicated situation and some stocks in the technology sector as well as 2 Etf’s in the technology sector to ride the most promising sectors in the next years.

In 2020 the portfolios achieved a performance of 4.9% thanks to the excellent active management made during the year. Presence of short ETFs in the first months of the year sold at the best time when the markets hit lows due to Covid, purchase of bonds and bond ETFs in the spring when they had very low prices that rose a lot during the year, purchase of some cyclical stocks in the summer, extremely undervalued, then sold before the U.S. elections, purchase of other cyclical stocks after the U.S. elections to ride the economic recovery with the arrival of vaccines.

March 2021: in the last months of 2020 and the first months of 2021, we increased the equity share in portfolios, mainly with cyclical stocks to take advantage of the expectations of a restart of the economy, especially those sectors particularly affected by Covid (tourism, transportation, consumption) or that will benefit from government investment.

This is my personal equity portfolio at the end of March. 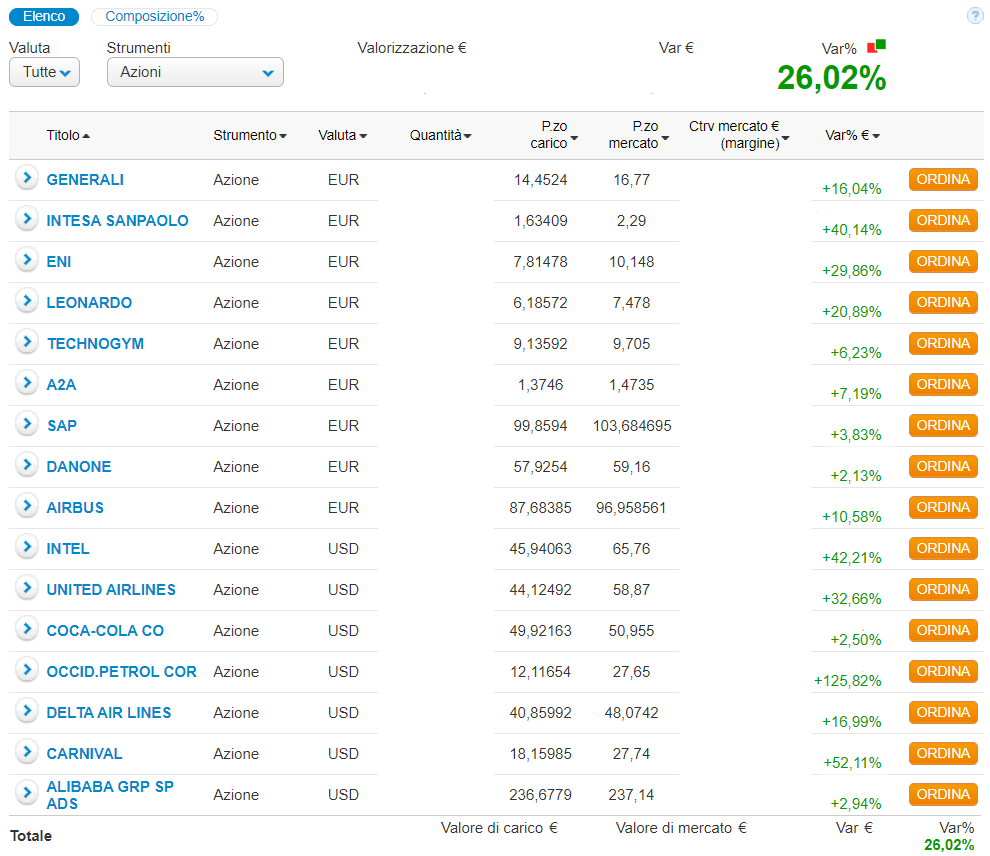 The portfolio as a whole was little affected by the fall in bond prices due to rising inflation expectations, thanks to the minimal presence of long bonds and bond etf’s on government and investment grade bonds, which have a large share in long bonds. In contrast, all high yield bonds and high yield etf’s, which are made up of short-dated bonds, held up.
All of this resulted in an overall portfolio performance at the end of March of 4.7%.

September 2021: we sold some long bonds in the portfolio at a huge profit to avoid losing the gains achieved due to a rise in interest rates. Specifically:

Occidental Petroleum maturity 2046 with a profit of 68%.

We also sold an equity etf and some stocks at a profit to avoid declines due to real estate problems in China, the emergence of possible new variants of Covid, and rising rates.

Intesa Sanpaolo with a profit of 47%.

Generali with a profit of 20%.

Technogym with a profit of 14%.

In doing so, we reduced the weight of the stock by almost half and generated cash for future purchases if prices fall.

October 2021: we sold Occidental Petroleum stock for a stratospheric profit + 170%, i.e., we more than tripled our invested capital.